I’ve just come back from a couple of excellent days of Humanities Hacking, organised by the King’s College, London Digital Humanities department and the Open Knowledge Foundation. To be fair, it went slightly differently than I thought it would.

After an interesting start trying to find the room we were in, a few of us gathered in the Large Committee Room in King’s College’s Hodgkin Building. James Harriman-Smith, Faith Lawrence and I ended up in a small group trying to figure out what to do with some existing literature data and trying to install an instance of Textus.

Faith worked on getting some texts, including John Carpenter’s Dark Star, which have been marked up with people against events. Our initial thought was to try and create a visualisation, like a stream graph, of social interactions. Faith spent some time getting the SPARQL query out of the endpoint and then worked on a SPARQL query which conforms to the Bechdel test. Meanwhile I worked on converting the XML into JSON so that the resulting graph could be put into a D3 visualisation.

Meanwhile, James, Sam and I worked on getting a Textus instance up but we think there was an issue with the network which prevented something being recognised. So an ongoing one for us then… 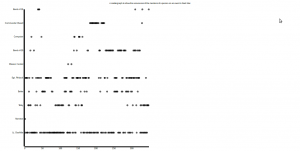 The next step is to fix the hacks used to generate the initial graph and to put it out on GitHub. I think that it will be two parts, the front end and the middleware part which converts the data.

The next step will be developing this further to create the stream graph which shows how characters fit together. We did talk about having some fun bits like skulls for character’s dying. Hamlet as skulls ago-go? We also discussed hacking the social network of a scene in a scene from a Shakespeare play to discover who is speaking to whom and who they mention. Its like the correspondence network which I dreamed about for Open Correspondence.

Meanwhile we had excellent presentations from Mark Hodges on using the Recline JS tool on some European Holocaust Research Infrastructure data (http://vimeo.com/54081437), using The Pundit tool on some texts in the DANS network. The British Library brought a shiny box of terabytes of data as well which will hopefully be opened up.

I gather that there are plans to do this again and hopefully I will be able to make it. The atmosphere was great and there are things to come out of this and work on.